What are the key Indian spices and ingredients used to make the amazing curries we all crave? I’m sure you’ve wondered how Indian restaurants pack so much flavour into their dishes. Do you follow recipes at home and feel that there is always something missing?

After spending considerable time in India attending cooking classes, visiting Indian spice markets and living in local homes I think I have a better understanding of Indian cuisine.

How can we overcome this difference in quality? Purchase your spices from your local Indian grocer. You will notice the difference in flavour and aroma immediately. Even in Australia, the Indian population won’t accept older, poor quality spices.

If you don’t have an Indian grocer buy your spices online. I have found every ingredient listed in my Indian ThermoKitchen cookbook available at India At Home. An online Indian grocery store. The links provided in this story are not affiliate links. I have provided them to make ingredients easier to source.

What are the Secret Indian Spices

What is cassia or cinnamon bark? The description of Cassia and Cinnamon bark is used interchangeably. The bark is harvested from the very outermost section of bark. The tree Cassia bark is harvested from is a member of the cinnamon family but it’s not the same tree. Characteristically this bark is quite flat, very easily broken or crumbled in your fingers and highly fragrant. It’s very easy to mill the bark into a powder.

Cassia bark is an important ingredient. It’s best to purchase this ingredient from an Indian grocer. If you need an emergency substitute you can add a small amount of cinnamon although there is a flavour difference.

These are aromatic dried leaves used at the end of the cooking process. The leaves have a subtle but important curry aroma and flavour. Fenugreek seeds are completely different and can’t be substituted. This ingredient is used in every curry as a garnish so it’s and important part of Indian cuisine and an authentic flavour, I usually used the MDH brand if I can find it. Kasoori Methi

This ingredient goes by many names but it’s a very distinctive product.  Indian chilli powder is made from the Kashmiri chilli. The Kashmiri chilli is mild and more flavoursome than the chillies we’re used to in Australia.  If you were to substitute Australian chilli powder or cayenne pepper you would find the dish too hot! Also, Indian Chilli powder is a much stronger red colour so it gives the curry its beautiful hue. Once again I like the MDH brand and I found this brand commonly used in India. Deggi Mirch

This is the Indian native sugar. It’s a light brown sugar but it’s very light in flavour and sweetness. The sugar is most often sold in blocks but can be found in a granular style which is easier to use in cooking. If you can’t find jaggery you could choose a light palm sugar or coconut blossom sugar. Jaggery sugar

Garam Masala is another spice which is used right at the end of the cooking time. It’s an important “finishing flavour” that helps add another layer of depth to the curries flavour profile.

I know it seems easy to buy garam masala from Woolworths but it’s a false economy. It has about one-tenth the aroma and flavour as your own freshly ground garam masala. Even after a year sitting in my pantry my home made garam masala smells as amazing as the day it was first ground. I can’t imagine how long the commercial varieties are on the shelf!

I have given a recipe for Garam Masala in my book. Please use that recipe to make a batch before you start the cooking the other dishes. It will take less than 5 minutes and the spice blend will last for ages. 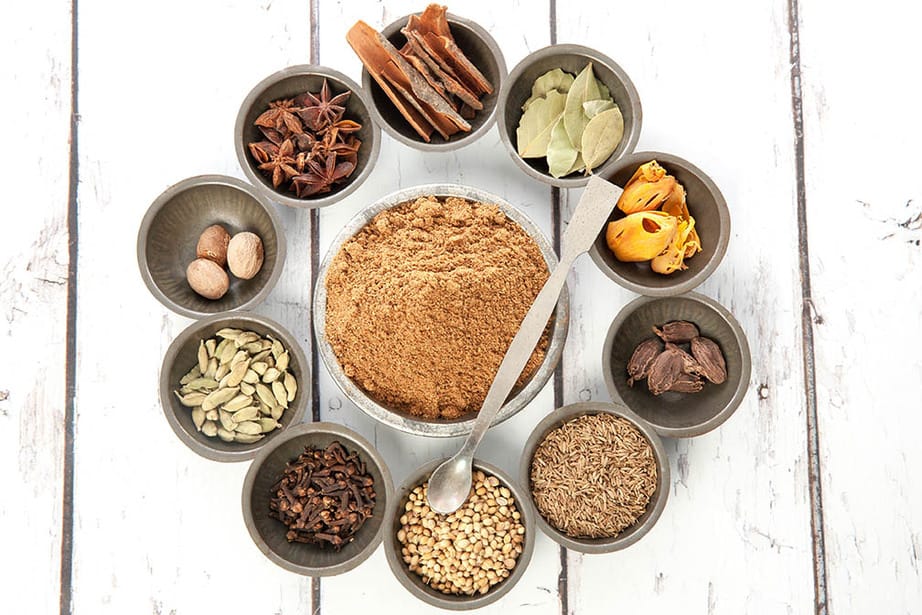 Have you every wondered how the tandoori chicken and butter chicken gets that amazing red colour? I will give you a clue, it’s not natural! Having said that red colour is commonly used in Indian cooking. If you want your dishes to have an authentic look you can purchase red colour. There is no taste to this product so not including it won’t have an impact on flavour. A word of warning… don’t get this product on ANYTHING you don’t want to be red! This product often goes by the name of “bush”.

Before I went to Indian I had this impression that Indians only cook with Ghee.  This was a problem for me because I’d used commercially prepared ghee in Australia and hated the flavour. Whilst in Indian I discovered that Indian ghee is beautiful.  It actually has very little flavour. Not at all like the rubbish we get here. So, I don’t buy ghee in Australia. I’m sure there are good brands but I haven’t found one.

So now I make my own ghee.  It is simple to make your own ghee in the Thermomix. Afterall, ghee is just clarified butter (butter with the milk solids removed.) If you don’t want to make your own ghee just use regular vegetable oil. During my time in Indian, I found that about 50% of the time regular oil was used instead of ghee.

There are some recipes that butter will be better than oil in a recipe. In my Buttery Saffron Rice recipe, I have listed my Indian spiced ghee as the ingredient to use. If you haven’t made the ghee yet you can safely substitute butter for the ghee as it won’t burn. 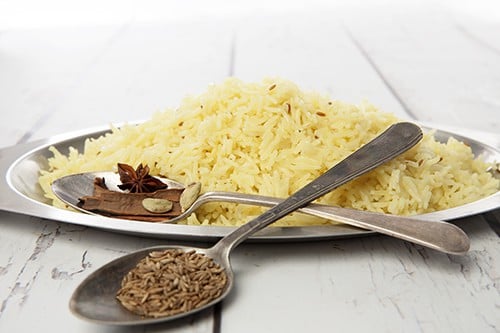 In all curry recipes, if you haven’t made the ghee just use vegetable oil.

We’ve talked about the different oils used in Indian cooking but I just wanted to mention why I used spiced ghee. In my book, I’ve given a recipe for what I called Indian Spiced Ghee. The butter is cooked with a strainer basket full of aromatics. After a three hour period, all the aromatics have left their flavour in the butter. Once the butter is strained you have a gorgeous, golden ghee that already smells like an Indian Curry.

I like to use the Indian spiced ghee as the base for frying off garlic, ginger and onion at the start of the curry making process. I feel this ghee gives the curry another layer of flavour. If you can imagine it’s like using stock in a soup rather than water. You can use either, but it easier to build a flavour profile when all the ingredients you add bring something new to the dish.

Atta flour is an Indian wheat flour used to make chapati, roti and puri. The flour is milled from hard wheat varieties known as Durum. Hard wheat has a very high gluten content which allows the dough to be rolled very thin without breaking. Atta flour

When I first heard about 2-year-old rice I thought someone was just trying to charge me more for rice! I really didn’t think there could be a difference between one quality and rice, to the next. I was wrong! Now I only buy Indian Gate Aged Rice for my cooking classes and my family. This rice is amazing. When it cooks it becomes almost twice the length of regular rice. It has the beautiful earthy flavour and aroma of basmati rice.  If you need convincing come along to one of my cooking classes and sample the rice with your meal. India Gate Rice 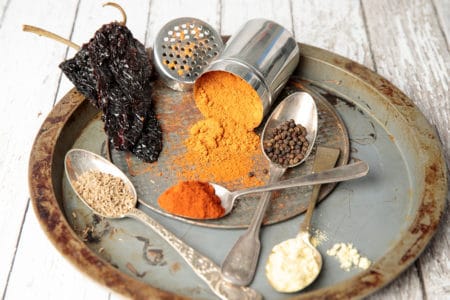 Where to buy Mexican Ingredients Online 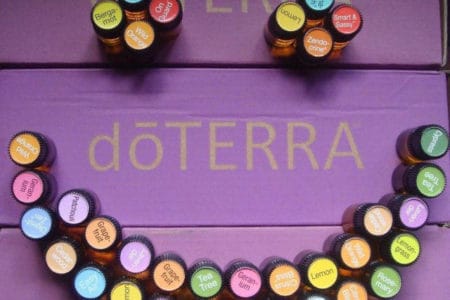 What are DoTerra Oils? Where do you Buy Them? 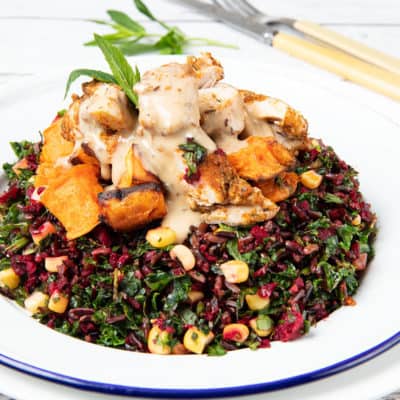 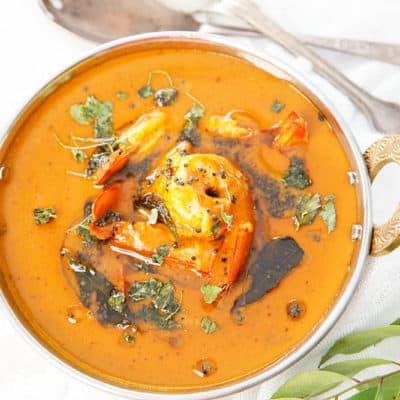 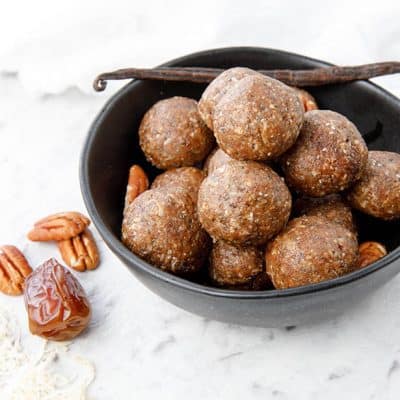 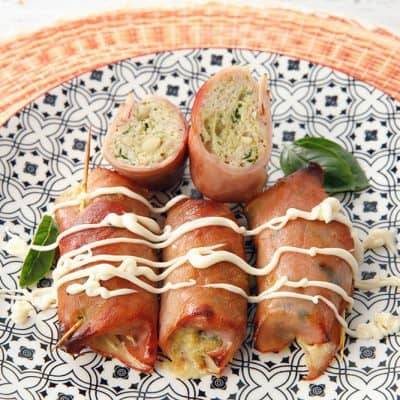 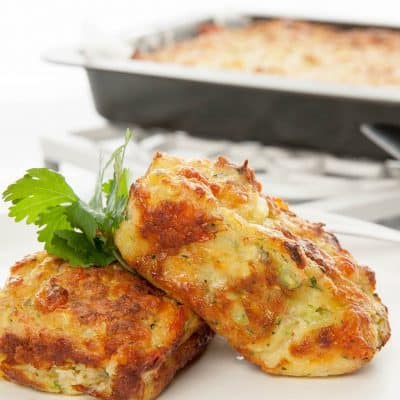 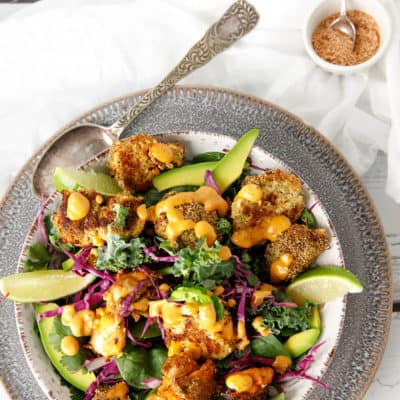 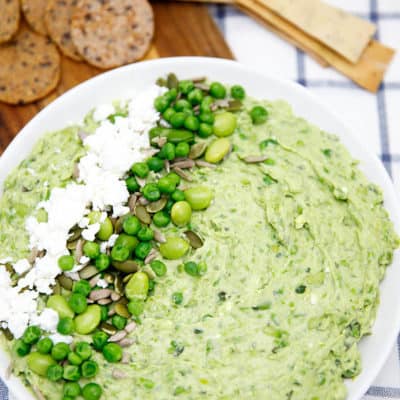